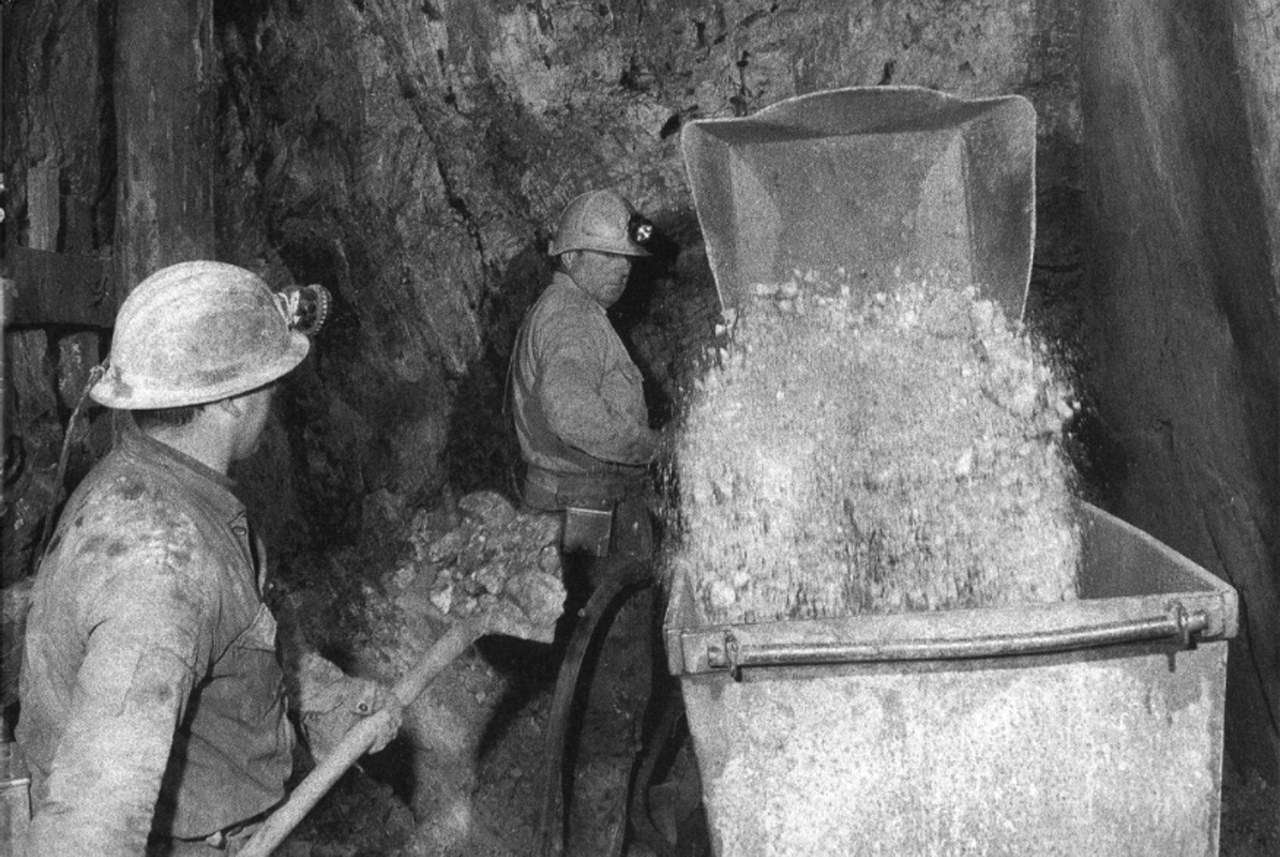 The Prestavèl mine is located on the western and southern slopes of Mt. Prestavèl at an altitude of 1500 to 1900 m a.s.l. The mine deposits had been exploited safely since the 16th century in order to produce silver galena. The largest vein extends approximately for 1,200 m and has a maximum depth of 10 m. The prevailing minerals are fluorite, quartz, calcite, galena and blende. In 1934, it was decided to exploit a number of fluorite seams.

During the early period of activity, some 30 metric tonnes (t) a day of coarse material were extracted. The working of the material took place in the Rio Gambìs valley, parallel to the Stava valley, at a place called “Miniera”, meaning “mine”. Fluorite was separated from other minerals by means of a gravimetric technique that does not require water. It was 75-85% pure fluorite, suitable for the steel industry.

From 1941, the mine was managed by Montecatini, followed by a number of companies belonging to the Montedison group and the Egam and Eni groups until 1980. From 1980 to 1985, Prealpi Mineraria managed the mine.

Around 1960, the Montecatini society decided to build a flotation plant in order to obtain 97-98% pure fluorite to be used in the chemical industry. Compared with the gravimetric technique, a flotation plant requires plenty of water and a nearby impoundment to deposit waste muds for decantation. The valley of the Gambìs stream could not provide any of the above prerogatives, therefore, the mining activity was transferred to the Stava valley.

In 1961, various facilities were constructed, among which: i) a flotation plant on the slope of the mountain at 1420 m a.s.l.; ii) a water-supply pipeline; iii) a cableway for the transport of the material extracted from the mine and iv) a chairlift for the transport of miners from the working plants to the entrances of the mine tunnels, which were located at altitudes of 1550 to 1787 m a.s.l. In addition, Montecatini built new houses for its employees in Tesero.

The water-supply pipeline started from a water intake on the torrent Stava, located a little uphill of Masi di Stava, with a discharge of 65 litres per second, although its flow was less abundant in the winter season. A further amount of water was obtained directly from the mine and conveyed to the flotation plant through a duct.

In the 1960s over 120 miners, workers and technicians worked in the mine and at the processing plant. The plant processed over 150 t of ore per day, with a processing potential of 200 t per day. The Prestavèl mine plant was used also for processing the ore extracted from other mines.

The mine was closed down immediately after the 19th July 1985 catastrophe.

Fluorite is frequently found in simple or geminate cubic or cubic-octahedral crystals; it is not rare in compact ore masses, sometimes coarsely crystalline.

When pure, it is colourless and perfectly transparent, but it can also be pale to dark blue, yellowish, green, pink, purple and even black (antozonite variety).

Fluorite is one of the most widespread minerals making up the gangue of hydrothermal metalliferous seams. It originates from high to medium thermal solutions. It is an accessory mineral in the cavities of many intrusive, effusive and schist-crystalline acid or intermediate rocks. It can also have a sedimentary origin, probably due to deposition in confined basins from thermo-mineral rich waters of volcanic origin.

From the economic viewpoint, the most important fluorite ores in Europe are those in Germany from the Harz region, Bavaria, Thuringia and the Black Forest, those from Derbyshire in England and those from the Massif Central (France). The largest fluorite ores worldwide are found in China, Mexico, Russia and the United States.

In Italy the most exploited ores are those from the provinces of Brescia and Bergamo (Lombardy), where fluorite forms the gangue of sulphur minerals (blende and galena), and those from Corvara in val Sarentina (South Tyrol) and Silius in Sardinia. In the past, fluorite ores linked to the epithermal dykes of the Athesia Shelf, such as those from Prestavèl (Trentino) and Brantental-Vallarsa (South Tyrol), were intensely mined.

Fluorite is mainly used in the metallurgic industry for the production of easily meltable slags, the purification of silica-rich graphite, the manufacture of easily ground cement clinker, the preparation of some kinds of glass, hydrofluoric acid etc.

It is indispensable in the ceramic tile industry, in the optical industry, for the production of plastic materials and the metallurgic treatment of bauxite.

The purest and most transparent crystals are utilised for the construction of achromatic lenses and spectrograph prisms.

The main producer of fluorite worldwide is China, with over 3 million t/year, followed by Mexico and South Africa (cf. minerals.usgs.gov). The world production of fluorite is about 4.7 million t/year, out of which 63% are from China. In the 1960s and 1970s, Italy produced nearly 100,000 t/year of fluorite.

As happens for many other minerals, fluorite is not extracted in a pure state. Two systems are used to separate it from the rock:

Flotation is a process relying upon the capability of finely ground minerals to aggregate to water. Aggregation is enhanced by adding appropriate chemicals. Before flotation, raw material is finely ground by mills (with the use of large amounts of water – some 10 m3 of water per tonne of rock), until it is reduced into very minute particles. The liquid mud is then sent to the flotation plant.

Air is then bubbled into the flotation bath to produce a dense froth. By adding appropriate emulsifiers, the hydrophobic (dry) particles attach to air bubbles and move to the surface (these are the desired and commercially useful particles), whereas the non-desired particles (the processing waste) are not protected by the reagents, so they remain wet (hydrophilic) and precipitate to the bottom of the tank.

Once the useful mineral is recovered from the gangue, it is thickened and filtered in order to eliminate as much water as possible. It is eventually stored in appropriate silos.

The processing waste – or tailings – is a very liquid mud, which is conveyed through a pipe to the tailings dam.

Apart from fluorite, froth flotation is utilised for the extraction of many other minerals.

Tailings dams are waste facilities serving mining industries for the storage of ore-waste resulting from mineral enrichment processes by means of flotation or leaching. They are used as deposits for the consolidation of waste mud.

At the bottom of the containing structure, a first small-sized (in height and width) embankment (called “starter dam”) is built, which serves as a basement for the dam to be built upon and as filter-bed for the dam itself. On this starter dam, the so-called “hydrocyclone thickening” takes place little by little.

A device called hydrocyclone, which separates the coarser grains from the finer ones by means of centrifugation, processes the waste mud coming from the flotation plant. The thickest sand is used for building the embankment, although its containment capacity is very low if compared to the high resistance of consolidated silt. The remaining waste – consisting now in 95% water and 5% fine material (silt) – is conveyed to the basin for decantation and deposit.

The suspended solid particles settle by gravity at the bottom of the basin and then water slowly flows towards the mouth of the duct and drains away into the overflow pipes. As the basin foundation grows, the outlet in use closes up, and water starts streaming towards the uphill outlet. 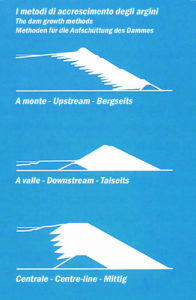 The upstream method is the quickest and most inexpensive dam growth system, although it is the least appropriate for dam safety, since its stability conditions worsen as its height increases because the dam, while growing, inevitably ends up resting on the largely unconsolidated silt inside the basin.

The tailings dams uphill of Stava

The first tailings dam was raised starting in 1961 at a place named Pozzole, on the slope of Mt. Prestavèl overhanging the Stava Valley, on marshy ground with an average inclination of 25%. The basin was therefore built approximately 400 m away from the flotation plant, 150 m higher and some 800 m away from the houses and hotels of Stava. The residual mud resulting from rock processing was conveyed to the tailings dam by means of a pipe.

Construction of the dam of the first basin was undertaken with a small starter dam, which was built of previously excavated soil and a permeable bed of faggots and basalt blocks. This starter dam was anchored to the ground by means of a reinforced concrete comb.

On top of this starting bank, the sand dam was progressively raised by means of the upstream method. At the time of the Montecatini-Montedison-Fluormine management, two mobile hydrocyclones set on rails were used. At every passage of the hydrocyclones, the dam rose by about 3 m.

The official request for authorization specified that the maximum height of the dam would be 9 m, but in 1969 the first basin was already over 25 m high.

At the end of 1969, the building of another tailings dam began, placed above the first one.

The mine appeared to be approaching total depletion. However, in order to avoid halting production, decisions were made to float the tailings in the lower basin and discharge the residual sludge from this second processing in a tailings dam other than the one from which it was retrieved.

Nevertheless, the objectives for building the second tailings dam were never attained because more mineral veins were discovered in the meanwhile. As a result, the second tailings dam was used as a disposal site for waste from the newly found fluorite seams. Additionally, it was also used to deposit the tailings resulting from processing the ore extracted from other mines.

The dam of the second basin was started uphill of the previous one without any provision either for anchoring it to the ground or for draining. The dam was initially raised by means of the centre-line method: as the dam grew higher, the base of its embankment grew wider until eventually it rested in part on the silt of the lower basin. Subsequently, the growth of the dam continued by means of the upstream method.

In both the Prestavèl tailings dams, the overflow pipes were placed inside the basins and discharged outside by passing through the dams.

The area where the tailings dams stood was completely reclaimed some years after failure. Some explanatory panels and a hydrocyclone placed on a heap of sand recall the deposition of the muds resulting from the mining processes.

In 1969 and 1970, under Montedison management, the Prestavèl plant was used also to process mineral extracted from the mines of Quaira-Kooreck and Case a Prato-Wieserhof in South Tyrol. From 1982 to 1985, under Prealpi Mineraria management, the plant was used to process minerals also from Tòrgola in val Trompia, in the province of Brescia in Lombardy, and from Corvara-Rabenstein and Vallarsa-Brantental, in South Tyrol. During that time, some 52,000 t of mineral from Prestavèl underwent processing, as well as over 131,000 t from the other three mines, that is 39,398 t from Tòrgola, 14,091 t from Corvara-Rabenstein and 78,219 t from Vallarsa-Brantental.

The residual sludge was discharged into the upper basin.

The Vallarsa-Brantental and Corvara-Rabenstein mines did not have separation plants or waste disposal facilities of their own. Until 1980, the material extracted from these mines was processed in the flotation plant of Rupe di Mezzolombardo, in the River Adige valley north of Trento. This plant was closed down in 1980 and was eventually removed, together with the tailings dams, in the late 1990s to make room for an industrial area.

The Tòrgola mine, located more than 250 km from Stava, did have its own separation plant, but not waste disposal facilities. The tailings from this mine were first discharged directly into a nearby stream and, later, in the waste facilities of the local cement plants, which implied a cost for the company. Since 1983, the material from Tòrgola was taken to and processed in the Prestavèl plant.

The Tòrgola plant was re-opened in 1985 and stayed running for some months after the Stava tailings dams had collapsed. The waste sludge was pumped into the empty mining veins and disused tunnels of the mine.

None of these mines is now active.