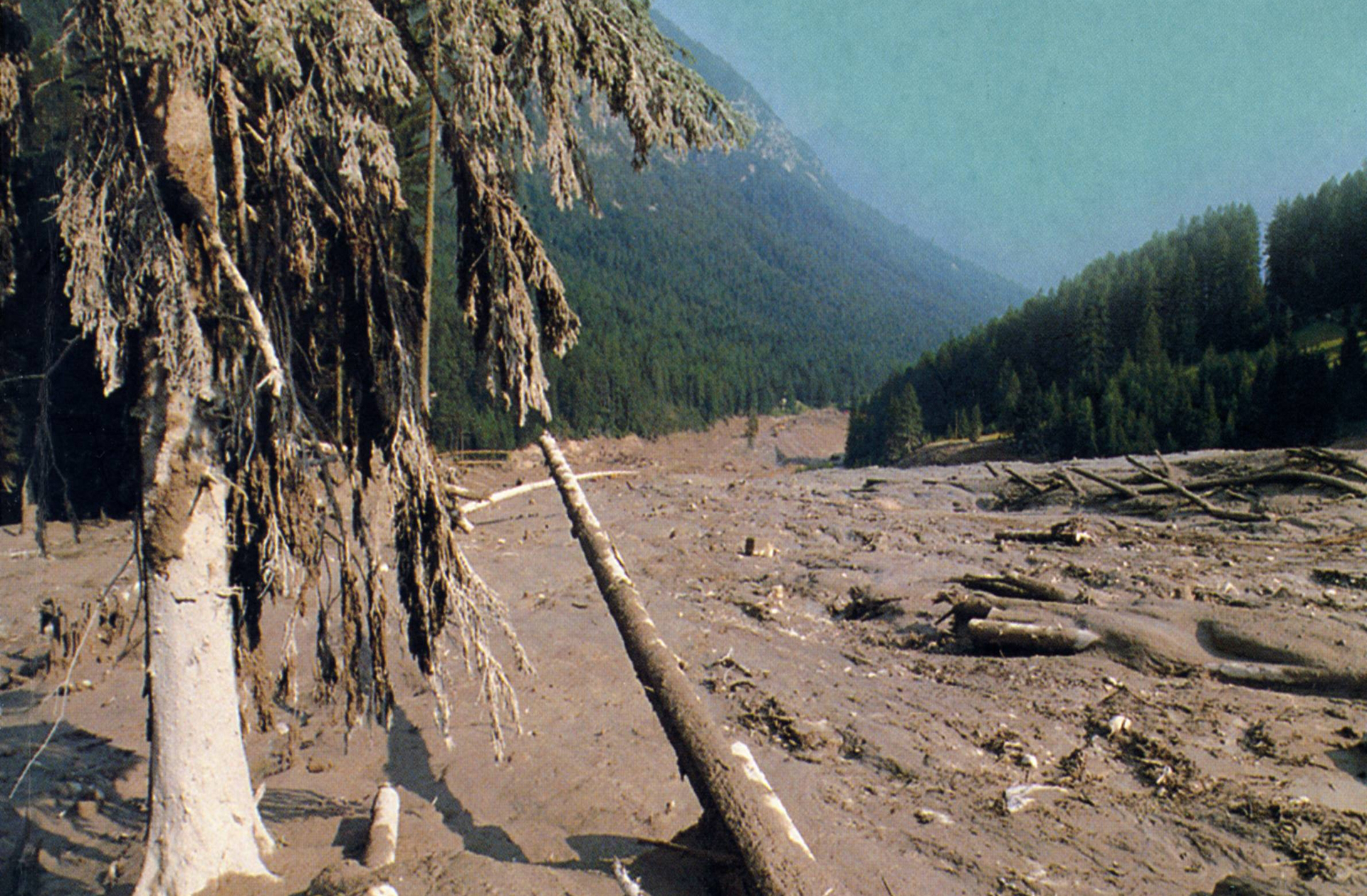 At 12h 22′ 55″ on 19th July 1985 the dam of the upper basin failed and collapsed onto the lower basin, which also failed.
The mudflow composed of sand, slime and water moved downhill at a velocity approaching 90 km/h, killing people and destroying trees, buildings and everything in its path, until it reached the River Avisio. Few of those hit by this wave of destruction survived.
Along its path, the mudflow killed 268 people and completely destroyed 3 hotels, 53 homes, and 6 industrial buildings; 8 bridges were demolished and 9 buildings were seriously damaged. A layer of mud measuring between 20 and 40 centimetres in thickness covered an overall 435,000 square metres over 4.2 kilometres.
Approximately 180,000 cubic metres of material poured out of the tailings dams. A further 40,000-50,000 cubic metres came from erosion, buildings demolished by the flow and hundreds of uprooted trees.

The Cavalese seismogram shows exactly how much time it took for the sludge to cross the Stava valley. 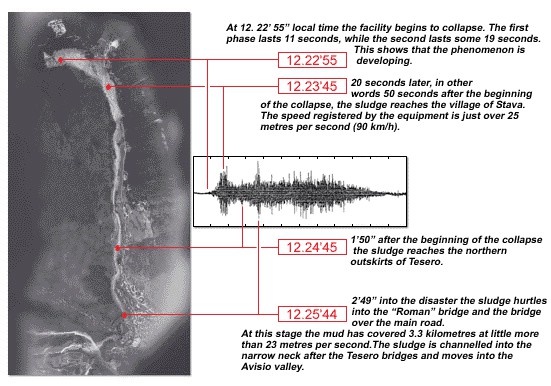 The catastrophe in numbers

From the ruling of the investigating Magistrate of the Trento Law Court: “Had the necessary investments been made, even one tenth of what is being spent in order to carry out this enquiry, 170,000 cubic metres of semi-fluid mud would never have collapsed”.

Rescue operations were immediate and efficient but very few people were recovered alive from the debris or just injured: the violence and velocity of the mudflow left no way of escape.

267 persons were killed instantly while a young woman, who was found alive in the rubble of a hotel in Stava, survived only a few days.

In order to establish the exact number of persons who lost their lives in the Stava disaster (268), it was necessary to wait for a declaration of presumed death for the victims who could not be identified.

In the case of Stava a special law by decree no. 480 of 24th September 1985, which became law no. 662 of 21st November 1985, reduced the time necessary for issuing a certificate of presumed death to one year.

Nevertheless, with the rulings of 26th September 1985 and 10th October 1985, the Trento Court authorized the issuing of the death certificates which, subsequently, the Municipality of Tesero sent to the 21 Municipalities where the unidentified victims came from.

In the months following the disaster, the number of lives lost was declared as 269. Later, a declaration as a missing person of a French citizen, whose death was never certified, was crossed out from this list.

The bodies of the unidentified persons rest in the cemetery of the Stava Valley Victims, adjacent to San Leonardo’s church in Tesero.

Then, within a few hours, all the Volunteer Fire Corps of the Province of Trento, many Volunteer Fire Corps of South Tyrol and the permanent Fire Brigades of Trento and Bolzano, the Red- and the White Cross rescue, Carabinieri, State Police and Customs Police officers, Forestry Corps, dog units, scuba divers and hundreds of volunteers were on the spot.

The largest number of victims was recovered during the initial stages of the rescue operations, which continued for three weeks. The bodies were taken first to the Primary School gymnasium in Tesero. Later the bodies lay in state at the Church of the “Pieve” in Cavalese, the same Church where the bodies of the 62 victims of the two Cermis cableway disasters lay in state in 1976 and in 1998, respectively.

The distressing identification process continued until mid-August in an air-conditioned building in Egna in South Tyrol. However, many corpses were impossible to identify.

Almost one thousand Red Cross volunteers worked round the clock for days on end to recover the dead bodies and take them to the mortuaries.

Volunteer-based rescue efforts, a long-standing tradition in the Alps, provided once again an impressive display of efficiency and, above all, wholehearted solidarity.

In 2005, the 20th anniversary of the catastrophe was dedicated to all the rescuers who were deployed during the rescue and casualty recovery operations.