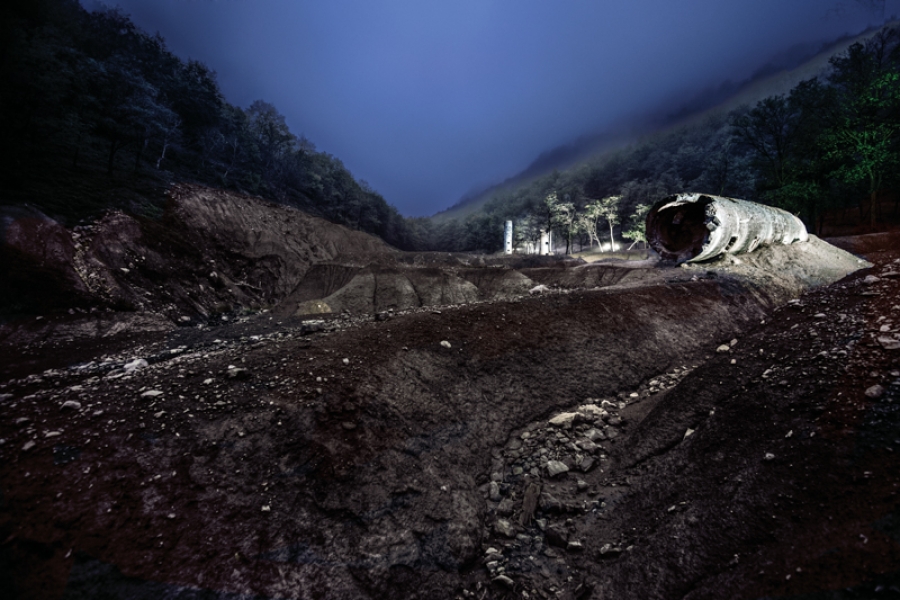 Around midday of 1st May 1966, a 450,000 cubic metre mudslide swept away the village of Sgorigrad in northern Bulgaria, killing hundreds of people and causing incalculable material and environmental destruction. This mudslide was generated by the collapse of the tailing containment dam where the waste muds from the flotation plant of the Mir-Placalnica mine were stored.

Exploited since ancient times (early records go back to the times of the Thracians and Romans), in 1960 the Mir-Placalnica mine was equipped with a flotation plant in order to extract minerals containing zinc and lead. The containment and decanting of the waste muds thus produced took place inside a tailings dam located in an adjacent valley.

This tailings basin was constructed by damming the valley with an embankment probably made of the sand recovered by means of hydrocyclone centrifugation from the mud waste resulting from mine workings. The stream running on the valley floor was dammed and its water was sent back upstream of the tailings basin. The concrete pipes for discharging the decanted water were placed at the bottom of the valley and the basin and were connected to overflow towers. The retaining wall for damming the torrent, the overflow towers and segments of the pipes are still visible today, together with small amounts of decanted mud, which remained in place.

The dam’s collapse was probably caused by overflow following heavy rains, and owing to the failure of a canal which had been constructed upstream of the tailings dam for diverting the watercourse. On the other hand, failure could have occurred due to water percolation inside the dam coming from a source located inside the basin, or by a combination of both circumstances.

The mudslide ran a distance of about 7 km, destroying most of the village of Sgorigrad, and eventually reaching Vratza, chief town of the district bearing the same name. Vratza’s main square was covered by a 20 cm thick layer of mud.

The bodies of the victims were recovered by helicopter and taken to Vratza’s stadium. Eyewitnesses reported that hundreds of corpses were taken to the stadium and their identification was a particularly difficult task.

The fact that the dam’s collapse occurred around midday of 1st May probably limited the toll of casualties, which was, however, already high. In fact, most of the inhabitants of Sgorigrad had gone to the town centre to take part in the official celebrations of the workers’ feast day.

The communist regime that in those days ruled over Bulgaria tried in all possible ways to stifle the news of this catastrophe. According to some witnesses, police officers did house-to-house searches throughout the area to confiscate all the photographs local residents had taken after the disaster. Officially, the number of lives lost was declared as 107, although several eyewitness referred that the toll of this disaster was much higher.

The Mir-Placalnica mine remained active until 1996. After the failure of the tailings dam overhanging Sgorigrad and Vratza, a second containment basin was constructed on the opposite slope of the mountain.

The people of Sgorigrad, whose main source of income came from mining activities, are now trying to develop the natural and landscape resources of the area in order to promote tourism as their principal revenue source.

On the 40th anniversary of the Sgorigrad catastrophe, 1st May 2006, the “Tesero Path” or “Path of the Stava-Sgorigrad Brotherhood” was inaugurated on the mountain overlooking the centres of Sgorigrad and Vratza. This itinerary was carried out by the Sgorigrad Municipality with the support of the Tesero Municipality and the Stava 1985 Foundation.

This path winds along a panoramic way facing the area where the tailings dam serving the Mir-Placalniza mine was located. Several explanatory panels written in Bulgarian, English and Italian provide excursionists with information on the analogies between the Sgorigrad and Stava Valley catastrophes. This path seals the link of solidarity and brotherhood which spontaneously unites the Sgorigrad and Tesero communities, both struck by similar disasters.

In 2008, in response to the proposal of the Stava 1985 Foundation, the Trento office of RAI (Italian Television) produced a short documentary film entitled “The Stava of the Balkans”, whereas the Arca Publisher from Lavis (Trento) published the book “Stava Sgorigrad – Identical disasters”. The film and the book describe in Italian, Bulgarian and English the analogies between the two disasters which are to be counted among the most serious ever occurring worldwide due to the failure of tailings dams.

On the initiative of the Municipalities of Vratza and Sgorigrad, on 1st May 2009, anniversary of the Sgorigrad catastrophe, a monument dedicated to the victims of the 1st May 1966 disaster was unveiled outside the Church of Sgorigrad.

In May 2010, on the anniversary of the Sgorigrad disaster, a square of Sgorigrad was entitled “Tesero Square”.

In 2012, on the anniversary of the Stava disaster, the square in Stava in front of the Foundation Information Centre was named “Sgorigrad Square”. This was done to strengthen the brotherhood between the community of Tesero/Stava and the community of Vratza/Sgorigrad.

The tears of Vratza