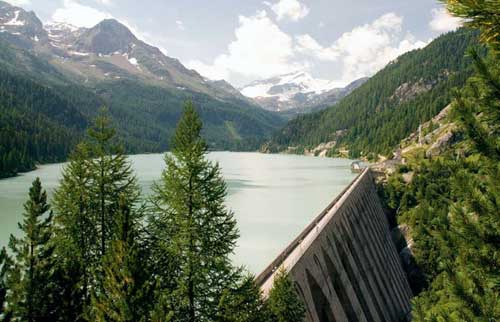 In the second half of August 1987, heavy downpours affected the Venosta valley in South Tyrol (Italy), causing a rapid increase in the water level, well beyond safety limits, in the hydroelectric reservoir contained by the Gioveretto dam in the upper Martello valley, a lateral hollow of the Venosta valley.
In the months prior to disaster, the managers in charge of the plant had filled up the reservoir in order to have the maximum water availability for the production of electric power during the autumn and winter. Even before intense precipitation, the reservoir’s level was approaching its maximum.

In the night of 24th August 1987, the person in charge of the power plant decided to open the bottom bulkhead in order to avoid overflowing. Local authorities ordered the evacuation of the population.

The mass of water released with the opening of the bottom bulkhead (350 cubic metres of water per second) caused considerable damage all along the Martello valley as far as the confluence with the river Adige, where the industrial zone of Laces was flooded.

The criminal trial ended with a sentence of culpable disaster for the person in charge of the Gioveretto dam. Edison Society indemnified compensation for a total amount of 24 million Euro in 2003 by means of a settlement agreement.